And They Call It Puppy Love 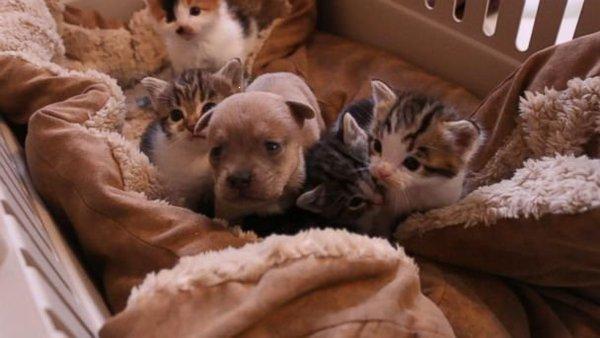 By and large, the human race has a deep and abiding love affair with domesticated animals. Perhaps the caveman aspect of our ancient ancestry still has that “call of the wild” as we take in lost, abandoned, and abused animals with no hesitation. Funny thing, animals are also inclined to foster orphaned baby animals and make them part of their own family tree.

This April fool’s day, a 5-week-old Chihuahua mix named Bobby was sent to the Michigan Humane Society – MHS – Bingham Farms, Michigan, after being picked up by a local rescue group. The pup’s mother had been hit and killed by a car when Bobby was just a couple of days old.

The MHS staff wasted no time accepting the pup and intuitively put Bobby with a mother cat named Gwen, who had a litter of five kittens. Gwen did what mothers do best and accepted the baby without hesitation, feeding and grooming the puppy from the start.

Ryan McTique of MHS, clarified the situation between Bobby the pup and the kittens, “They’re pretty young, so they’re growing into their personalities. After the puppy is big enough, we are going to get Bobby in foster care among dogs, so he can learn to be a dog. He’ll be a good ambassador for both species, that’s for sure.” 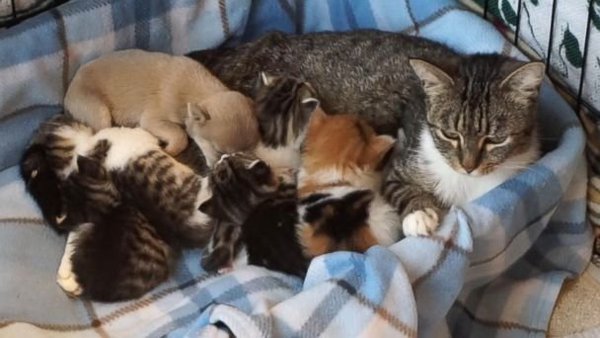 “Gwen, she was very content with all her little guys running around, so it seems like a perfect fit,” McTigue said.  “We’re helping with their medical needs. They’ll be in foster care until they are big enough to find loving homes.”

On April 22, MHS posted a video of Bobby and his blended family onto their Facebook page. So far, more than 50,000 people have viewed the story and many have already inquired about adopting the animals. No one thinks these kids will be homeless or abandoned anytime soon.

And they call it puppy love, with unmistakable proof that Love is the Answer.