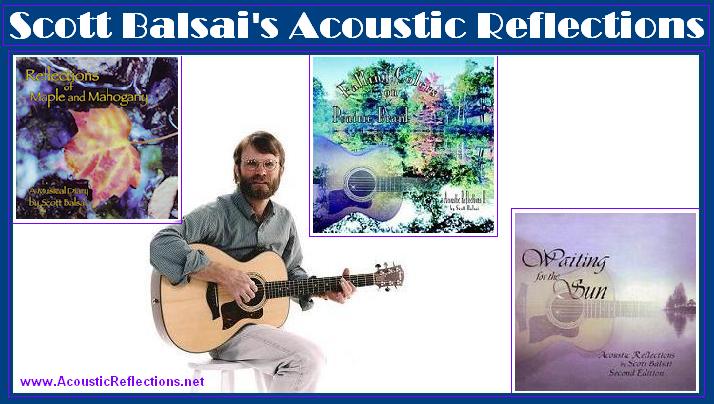 Acoustic Reflections is what Scott Balsai calls the compositions he creates on his acoustic guitar.” Each piece,” he says, “reflects a sliver of my life, but taken together, they can be seen as a musical diary of ‘tone poems’ which reflect my life as a whole.” The compositions carry the listener from Balsai’s hometown in Bethlehem, Pennsylvania, to his hiking the Appalachian Trail to his moving across the country to live, teach, ski, fish, and hike in Idaho.

Having been born and reared in Bethlehem PA, from 1954 to 1980, Balsai had the fortune of having been located in an unusually rich musical milieu. Home of the Godfrey Daniels Coffee House, where the likes of John Gorka and others got their start, Balsai remembers when he, too, warmed audiences there, before he moved to Idaho in 1981 to pursue a career in education. Scott also remembers learning his first electric guitar licks with the help of Steve Kimock, who is now an internationally known rock-jazz guitartist.

Scott has released three CD’s of Acoustic Reflections. His first album Waiting For The Sun, which has since sold out, was recorded in 1998 in Pocatello,  with the help of Steve Eaton. In 2010, Scott released a new version entitled Waiting for the Sun: Second Edition, which was produced in his own recording studio from 2007 to 2010. His second CD Falling Colors on Prairie Braid was recorded in 2004 with the help of Dan Mihlfeith. The third CD Reflections of Maple and Mahogony: A Musical Diary was completed in 2010.

“Scott’s CD’s ring with sparkling clarity … and … glimmer with the rich, hypnotic pulse of a sun-dappled stream.” Taylor Guitars