The Answer Is Blowing In The Wind

In 1938, Dow Chemical unloaded a product called polystyrene, a.k.a. plastic No. 6, on unsuspecting earthlings, with the unhappy result of nearly clogging the planet to death. The product ultimately changed its trade name to Styrofoam, and if left unchecked, the ecological impact is too huge to be fully measured. No one seems confident that the damage can ever fully be undone.

In the scheme of things, Styrofoam takes about 500 years to decompose, and while it can be recycled,  no one wants it.  Amazingly, the petroleum-based plastic is comprised of 95% air. If lined up end to end, there are enough Styrofoam cups produced each day to circle the earth. And volumes could be written about the disaster facing life in the oceans, which we have unwittingly used as landfills for dumping everything.

In a commercial sense, the plastic is used as to-go containers for food service; packing peanuts; meat trays; and a host of other things that need a buffer between the product and the bruising world of transportation. It is also useful to help keep things hot or cold. Given the fact that Styrofoam is known to have outlived its usefulness, it is no surprise that people feel driven to find a healthy alternative. 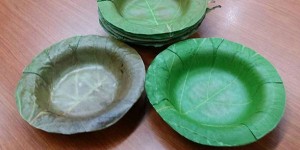 Leaf containers and bowls are about to make a huge splash, and are beautiful and biodegradable.

Sometimes We Just Have To Upgrade

By now we recognize that those of us at the “top of the food chain” are completely reliant on life at the lower end of the chain to be healthy. This white pollution is the #1 form of marine debris, costing governments around the world major money in storm-drain cleanup. There is just not enough time in the day to talk about how this cheap white stuff is costing us a fortune in too many ways to count.

The French ministry of ecology claims more than 14 million metric tonnes of polystyrene are produced every year around the world. Americans throw away an estimated 25 billion Styrofoam cups every year, or about 82 cups per person. The U.S. Environmental Protection Agency says of the three million tons of polystyrene produced in the U.S., 2.3 million tons end up in landfills, with much of the remainder finding its way into waterways. 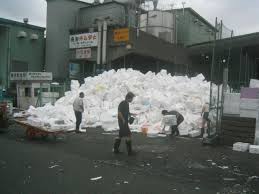 A microscopic pile of Styrofoam

The Earth Institute recently released an article about the current move to say goodbye to Styrofoam, and hello to common sense and the necessity to leap into action with a better plan, not in the future, but right this minute.

At Naresuan University in Phitsanulok, Thailand, concern over the rising pollution on the planet with the use of Styrofoam containers has encouraged an engineering research team to develop a process to make watertight, degradable food bowls and platters from the leaves of the thong kwao, sak, and sai/banyan trees. While these trees may be foreign to most westerners, they are indigenous to the people of Thailand.

What prompted the experiment was a visit by Samorn Hiranpraditsakul, one of the faculty lecturers, to a temple in northern Thailand, which was littered with huge piles of Styrofoam food containers. Returning to the university, she and other faculty members spent the next year testing various leaves from different trees until they hit upon the right formula to make sturdy, non-leaking bowls and platters to replace Styrofoam counterparts.

The Banyan Tree is delighted and happy to help bowl the world over!

Plants are beautiful by their very nature, and the researchers were careful to highlight the uniqueness of each dish with a starch gloss in a variety of colors.

Sirintip Tantanee, the faculty’s dean at the university, said the inventors will coordinate with the municipality to promote the use of these patent-pending bowls at the provincial annual food festivals.

The engineering team will be introducing this earth-friendly product during the Songkran Festival, celebrated in Thailand as their traditional New Year’s Day from April 13-15, and will no doubt lead the way to a brighter day.

Plants undoubtedly know that Love is the Answer.

Photos by Chinnawat Singha – Thank You!